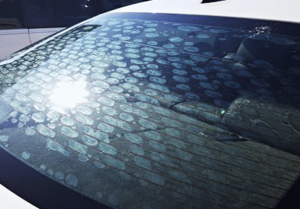 Its common to see bubbles on the rear windshield of old cars. So what causes this? Well, there are two main reasons behind, which are the quality of the tint and the skill of the technician.

There are so many types of window tint films available in the market. However the film quality can only be tested through time. Over time, bubbles occurred due to low quality film as the film degraded, the tint lost adhesion but all of these have nothing to do with the defrosting grid on the rear windshield.

Technician’s skill during installation is crucial as bubbles could be caused by dirt. Window tinting should be done in a closed room as in open space the high air movement could cause the dirt and dust to stick onto the window. The removal of tint lining causes the accumulation of electrostatic charges on the film, this attracts the dust and dirt from surroundings to stick on it. Thus, skilled technician were trained to reduce the risk to attract dust and dirt.  For example, the door is not opened or closed swiftly during installation process to avoid rapid air movement that could drive the dust and dirt everywhere. Other than that, the cut window tint will not be placed on the cushion, carpet, bonnet or the car top which is full of dust. During the finishing part, the removal of water using rubber wiper and plastic wiper should be done in one direction to avoid trapping of dust in the middle of the tint.

Thus defrosting grid doesn’t cause bubble formation but poor installation skill could damage it. During the removal of old film, if the process was too harsh, defrosting grid might be broken and damaged completely. This causes an irreversible effect and the only solution is to replace the windshield with a new one. Even though the defrosting grid is not damaged, poor skill could harm the adhesion surface and affect its aesthetic appearance. The appropriate way to remove the old tint is by heating the tint film with a hot gun, spray it with soap and remove it cautiously. However the formation of bubbles could indirectly damage the defrosting grid.Low quality tint degrades, forms bubbles and hardens over time. So when you see bubbles are formed, please do not hesitate to change a new tint because when the tint hardens it will be inseparable from the defrosting grid and doing it with force will only destroy the defrosting grid.

Have you ever wondered how is a window tint being installed? Here come some useful tips. First of al…

WHY CAR TINTED SO IMPORTANT IN MALAYSIA? Installing a car tinted is very common in Malaysia, almost …

(darkness can be differed by the visible light transmission you choose)